Matteo De Blasio is an Italian artist and autonomous researcher, based in Brussels.
While graduating in Philosophy at the State University of Milano with a thesis on the process of individuation in the XIX century biology and Nietzsche perspectivism, he developed a strong theater background based on the acting approaches of Jerzy Growtoski and The Living Theater (Judith Malina) while studying at Quelli di Grock school of theater, circus and dance in Milano. For consecutive five years, he worked as an actor in the renown Teatro Franco Parenti.

Starting by questioning the semantic of the space in which the body performs, his interest has shifted to performance art. With the support of MovinUp (MiBACT) he attended ISAC-Master program in choreography and visual art, directed by Daniel Blanga-Gubbay and he developed a research interconnecting/interrelating narrative and performativity, staging words, objects, presence and absence of the human body. The act of instant writing took an important part in his research, continuously interested in overcoming the tension between fiction and reality. Being interested in the sensual real place where existent borders (sexual, political, living/non living) can be faced and challenged, he wishes to allow a space where identities and stories collapse and emerge. His experimentations give rise to a work built around the moment of the encounter, as trespass, questioning the borders between author, performer, object and the audience.

“Moving from the semantic of the space perceived through the body to body-geography researches, I find in the zone of eros, pleasure and desire an alive knot of friction between normativity and the multiplicity of existence. I wish to share and inhabit this space in a decolonial and queer perspective, aiming to imagine forms of lives that will move across the end of capitalism” 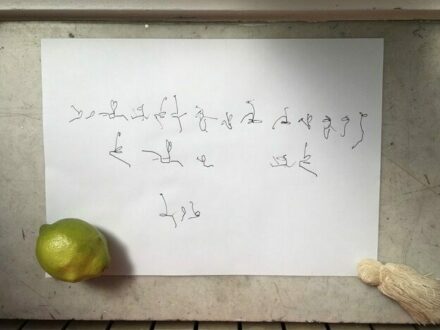