Cie BARHAL is a collective four dancers/choreographers based in Brussels. The members are:

Oumar Diallo, choreographer of his piece KIFESH, is a young Brussels hip hop artist and activist. In 2012, he started freestyling. He started to follow courses and workshops and to participate in battles.

In 2017, as part of 1000 Pieces Puzzle, he won a residency in Zinnema to develop his project. He then participated in I have a dream exchange with the piece C'est la procédure by Cindy Claes. These two experiences lead him to grow artistically and explore new horizons in dance.

After training with Brahim Rachiki and another training at the Tremplin hip-hop 3eme édition, he participated in the Hip Hop Games 2019 with his team BARHAL that he co-founded. Member of the JFB collective, he is also active in the freestyle scene.

Danys Jason “Popping Danys” Vanderhaeghen is the choreographer of his piece AUJOURD'HUI, TOUT VA BIEN and self-taught dancer specialised in Popping and Locking since 2010. Member of the Belgian guest team at the Hip Hop games Lille 2017, participant of the programme 1000 Pieces Puzzle 2019 where he presented his piece. He is especially active in the battles scene: he is vice-world champion in Locking at the World Battles in Arizona and two-time guest of the Red Bull dance your style for example.

Tomas Ntamashimikiro, choreographer of his piece BULLY, is a dancer/choreographer/beatmaker and filmmaker from Brussels. He started his career as an artist in 2013 by winning the Kunstbende talent competition first in Brussels and then the Flanders final. He then entered the Belgian freestyle scene by training in Brussels and Antwerp. Thanks to various programmes for choreographers such as 1000 Pieces Puzzle, DIY Summer School, and the Tremplin Hiphop, with which he toured Wallonia and Brussels, he evolved from freestyler to choreographer. He is now a member of the WantedGroove crew, dance teacher at Let's Go Urban and the Aarschot Ballet School, and creator of urban dance pieces with which he performs across the country, such as his creation as choreographer BULLY, and the piece Enter The BCU where he is co-choreographer and performer with Barhal Cie. 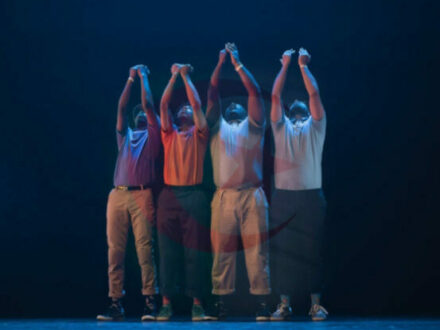