Christina Phoebe is an artist, filmmaker, writer and researcher working in Athens andBrussels. Her work bridges disparate experiences of diaspora, belonging and home through site-specific performances, cinematic nests and watercolor notetaking. Central to her practice is the formation of collective spaces for sharing (experiences, skills, knowledge) in workshops and homemade residencies, through feminist pedagogies and decolonial practices.

After graduating from New York University (BFA, Studio Art), she continued her studies in the Seminar for Creative Documentary at KET (TV Control Center) in Athens, focusing on the common ground between documentary film and performance making.

Her work, both personal and collaborative, has been included in exhibitions, platforms and dialogues at the 15th Venice Biennale of Architecture (Greek Pavilion) in collaboration with the Nomadic Architecture Network and the With Nails and Teeth workshop; One MinuteSpace (Athens); YNKB (Copenhagen); Flux Factory (New York); Jeu de Paume's LeMagazine, E-Flux among others.

Her writing has been published in (Forced) Movement: Across the Aegean Archipelago (kyklàda.press), Prologues (curated by miss dialectic, Klea Charitou and EleannaPapathanasiadi), Movement I - Transpirings with Lauretta Macauley (ed. Alkistis Efthimiou),The eye of time (Photogénie), visAvis: Voices on Asylum and Migration, and The New Nomadic Age (Equinox Publishing) among others.

Her first feature film Amygdaliá (2019) is a personal and collective reflection on belonging and borders. It has screened internationally at festivals, exhibitions, educational contexts, residency spaces, and community centers in Italy, Spain, Estonia, Greece, Albania, Belgium,Argentina, Mexico, the U.K. among others. Amygdaliá is discussed in Toby Lee’s book The Public Life of Cinema (2020), and in the writing of Rabab El Mouadden, Elena Stefanopoulou and Eliana Otta. More: www.amygdaliafilm.com She is currently developing her second feature film Rock, Paper, Scissors! in Brussels in the context of Sound Image Culture 2022.

She began independent research in 2018 focusing on women’s filmmaking in the Greek context, and began organizing circles with women working in the arts, art criticism, cinemastudies and performance. The collective project Surplus Cinema, centering moving imageworks by women and non-binary artists produced in the greek context and the diasporas, isa continuation of this ongoing process.

She was the George Stoney Fellow at the 64th Flaherty Film Seminar The Necessary Image and a Visiting Artist with the Post Film Collective at Kunstencentrum Vooruit, Ghent. Her work has received support from NEON, the Greek Film Center and STEPS. 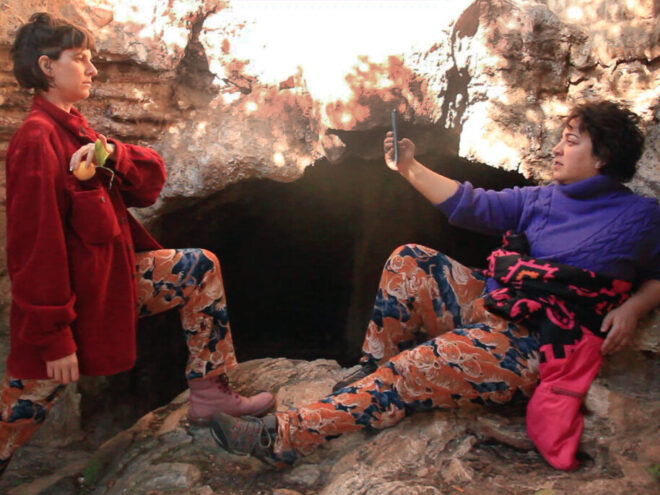