Collectief Elan(d) is a Ghent-based performer collective. Within this collective, three female creators/performers with a background in choreography, directing and creative therapy are united. Chloé Geers, Jitse Huysmans & Katrijn De Cooman form an unusual combination, but one that produces playful performances in which the audience plays the leading role. Encounter is a recurring theme in their work, in which they consciously break through the passive role of the audience and play with alternative audience constellations.

These three joined forces for the first time in 2015 and created The Girl With Too Many Bags. A year later they built on this performance during a residency in Croxhapox Ghent and played at the Makersday#3 in Het Huis Utrecht. Subsequently they resided in Kunstencentrum Vooruit and came to In between spaces. With this performance they premiered on TAZ#2017 (young work). After that In between spaces could be seen at Radar festival (CC Mechelen), Jonge Hartenfestival (Groningen), Frascati (Amsterdam), CAMPO (Ghent), CC De Schakel, (Waregem) Het Huis Utrecht, CC Wevelgem, CC De Steiger (Menen) (collab. with De Figuranten), Schouwburg Kortrijk & Leietheater (Deinze). In December 2019 their second production Loving is Allowed premiered under 10X10 (Kunstencentrum Vooruit & LOD Muziektheater) at LOD Muziektheater.

In 2021, the collective will create I think we need to talk, in co-production with workspacebrussels.

Katrijn De Cooman (°1991, BE) obtained her master's degree in Autonomous Design at the KASK in Ghent in 2016. In 2018 she graduated as theater teacher/director at Toneelacademie Maastricht. Besides Collectief Elan(d) she works as a (drawing) model and as a freelance (movement) theater teacher/ maker/player at a.o. Kopergietery, Wisper, Schouwburg Kortrijk, Het Paleis, Veerman, Odisee Hogeschool, NTGent, Victoria Deluxe and Platform K.

Chloé Geers (°1991, BE) studied after her studies at the MUDA art secondary, choreography at the Fontys School of the Arts in Tilburg. She works as a dance teacher at the MUDA art secondary and DKO STAP Roeselare. Besides Collective Elan(d) she is active as a dancer and maker in various projects. She has worked with Opera Gent, Platform K, Julie Cafmeyer, Mus-e Belgium and Deewee.

Jitse Huysmans (°1991, BE) obtained her Banaba in drama therapy in 2016 and until recently worked as a drama therapist in forensic care. She uses the powerful medium of drama in different target groups. She has made social artistic performances in collaboration with the City of Ghent, OCMW and Kras & plays in a theater performance on justice by U move 4 Peace (Pax Christi). Currently she works as a theater teacher at various organizations such as STAP Roeselare, the Scheldeoffensief, Schouwburg Kortrijk, NTGent & Veerman. 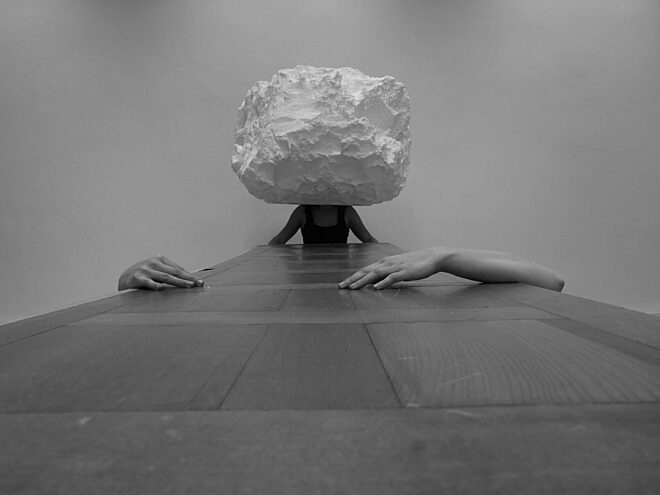 I Think We Need To Talk